There have been some absolutely insane seasons put up by running backs in the NFL. Deciding just which five are the top isn’t an easy task, either. Marshall Faulk’s 1,000-yard rushing and receiving yard season just missed the list. Barely. 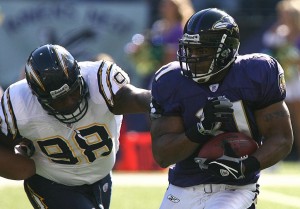 Jamal Lewis was an absolute beast for the Ravens in 2003. Running roughshod over the entire NFL for a ridiculous 2,066 yards. He came within just 40 yards of breaking the single-season rushing record held by Eric Dickerson.