Minnesota United FC is an American professional soccer team based out of the Minneapolis-Saint Paul area of Minnesota. They are a member of the Western Conference of Major League Soccer. They were founded in 2015, but began play in 2017. Their current head coach is Adrian Heath. The team’s home stadium is TCF Bank Stadium in Minneapolis, Minnesota. Their home colors are dark gray with light blue undertones and their away colors are white with dark gray and light blue on the shoulder of the jersey.

The top scorers for Minnesota are forward Christian Ramirez, midfielder Kevin Molino who is a native of Trinidad and Tobago, and midfielder Johan Venegas who is a native of Costa Rica. Though these may be the top scorers for the team, they need the rest of their teammates to get the ball to them so they are able to score. Often, the players recognized most are those that score, but every member of a team is necessary for a goal to be scored.

In the picture, Minnesota defender Francisco Calvo tries his best to stop the other team from scoring by sliding towards the ball to prevent it from going into the net. If he stopped the ball, he would have been able to pass it to one of his teammates, whether it be another defender, a midfielder, or a forward to turn the game around. If he took back control of the ball, his team would then have become the offense, changing the pace and forcing the other team to defend their goal. His attempt was honorable though seemingly unsuccessful. 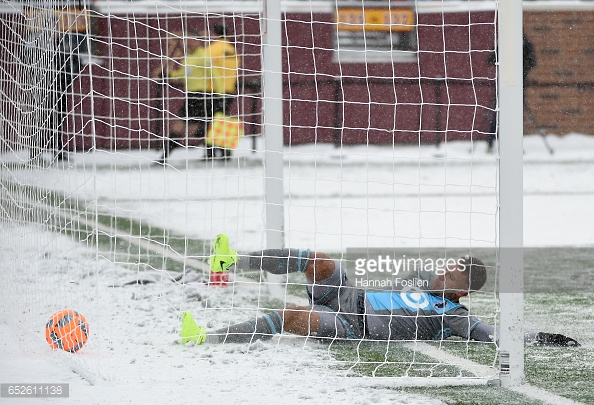