In the NFL, penalties are a sanction called against a team for a violation of the rules, called a foul. Penalties are given after a foul so the “punishment fits the crime” and gameplay can remain fair. The result of a foul is the penalty, usually giving the team the foul was committed against a 5-, 10-, or 15-yard advancement down the field towards the offending team’s end zone. On the other hand, it can also require the team that committed the foul to retreat 5, 10, or 15 yards back from where the foul was committed. Fouls committed while the ball is in play can result in a replay of the down at the new position on the field after the penalty is assessed. Penalties against the defense can award the offense an automatic first down, while penalties against the offense rarely result in the loss of a down. When a defensive foul occurs after time has expired at the end of a half, the half will be continued for an untimed play from scrimmage. The rules exist to ensure equality, safety, fair contact, and the responsible and sportsman-like conduct of players. The difference between a foul and a penalty is that a foul is the broken rule and the penalty is the consequence of the broken rule.

Once the ball is dead after the play or before a snap, the officials confer about whether a foul was actually committed and then come to consensus about what the penalty or infraction will be. They then discuss with the on-field captain of the team that the foul was committed against whether to have the penalty imposed or to just continue with the result of the play because that may be more advantageous. For example, the play may have given the offense a 7-yard gain, whereas the penalty against the defense may offer only a 5-yard gain. At times though, the enforcement of the penalty cannot be declined. After the final conference, the referee makes visual signals of the foul. This consists of the foul committed, the team that committed it, whether or not the opposing team chooses to decline it, and the resulting down or possession. 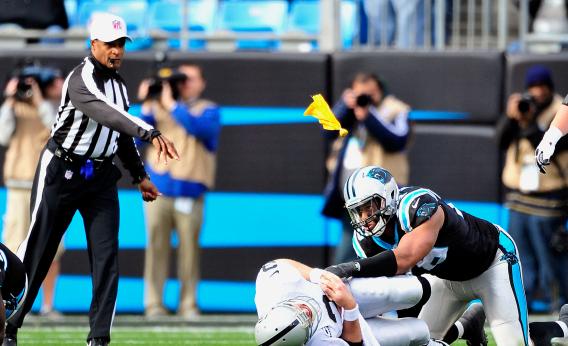