When the offense fails to advance 10 yards during the three downs, they have three options during the fourth down. The offense has the option to punt (kick) the ball to the other team, turning over possession of the ball and starting the other team’s offensive drive. The second option is for the team to attempt a field goal if they are in range, which would give them three points if successful. The third option is to attempt a final play from scrimmage, which is called a fourth down conversion or going for it. If the offense fails to gain the necessary yardage during their final fourth down, the ball turns over to the other team. Therefore, offenses generally only try fourth down conversions when they are close to midfield or in their opponent’s territory. Otherwise, if they fail to make the first down, they give possession to the other team at a location that would be disadvantageous to their own cause. When a team doesn’t make their 10-yard requirement and possession is turned over to the defense, this is called turning the ball over on downs. 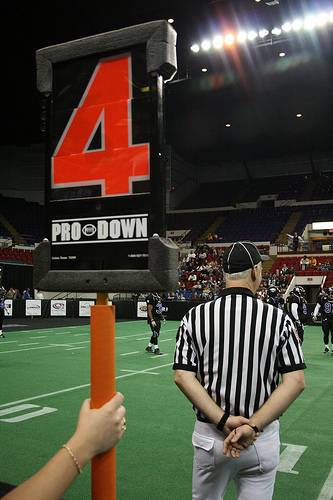