The LA Galaxy or Los Angeles Galaxy is an American professional soccer team based out of a suburb of Los Angeles, California called Carson. The team is a member of the Western Conference in the MLS and was founded in 1994, but did not begin play until 1996. The current head coach is Curt Onalfo. Their home stadium is StubHub Center in Carson, CA. Their home colors are white with a navy blue and gold stripe. Their away colors are navy blue with gold undertones.

An interesting note about the Galaxy is in 2007 the team made quite an international frenzy when they signed David Beckham, an English native who was traded from Real Madrid. It was considered the most high-profile transaction in Major League Soccer up until the time.

In the picture, midfielder Joao Pedro of the Galaxy attempts scoring after his teammate headed the ball towards the net. The goalie of the opposing team, Tim Melia of Sporting Kansas City tries to make the save. Depending upon Pedro’s actions, a referee could determine the play dangerous if Pedro tried kicking the ball right next to, into, or actually connecting his foot with the goalie’s face. 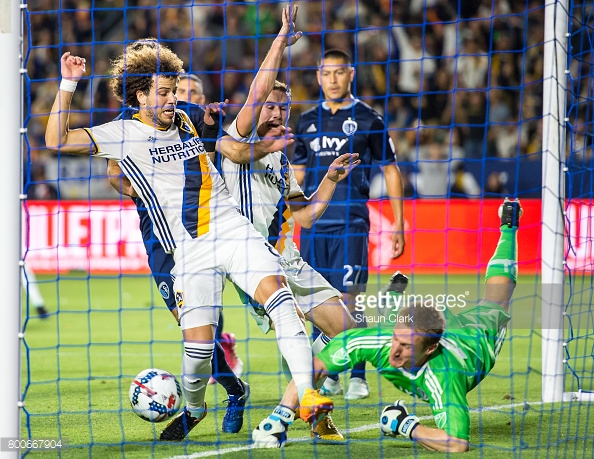