A field goal is another way to score in the NFL. The team in possession of the ball must kick the ball through the goal posts and above the crossbar. The goal posts are located on the center of the end lines in the end zones. A field goal is either a place kick, a drop kick, or a fair catch kick. A place kick is the most common form, whereas drop kicks were common in the early days of football but are very rare now.

A place kick is when the ball is snapped to the holder, who holds the ball in place for the placekicker. The holder is usually 8 yards behind the line of scrimmage where the rest of the team is tightly bunched at the line of scrimmage and the kicker is a few yards behind the holder. Once the holder places the ball vertically on the ground with the stitches facing away from the kicker, the kicker is already in motion so there is little margin for error. A drop kick field goal is when a player drops the ball and then kicks it after it bounces off the ground. There has been only one successful drop kick since 1940, completed by Doug Flutie of the New England Patriots in his last NFL game. A fair catch kick allows the offense that has just completed a fair catch to attempt a place kick or a drop kick from the spot of the fair catch. These are taken when they team is in range of completing a field goal and three points are all that are needed. The last successful fair catch kick was in 1976.

Field goals are attempted in different instances for different reasons. Typically, they are attempted on fourth down when the offense is more than a yard from gaining a first down and less than 45 yards away from the goal posts. These types of field goals are worth three points. The longest recorded field goal in NFL history is 64 yards, kicked by Matt Prater of the Denver Broncos in December of 2013. Field goals are also attempted when there is only enough time to execute one more play and this is the least risky way of scoring the points needed. Another type of kick for points can be taken after a touchdown is scored, which is worth one point. This is known as a try, conversion, point after touchdown (PAT), or extra point. The line of scrimmage is on the 15-yard line for this kick. 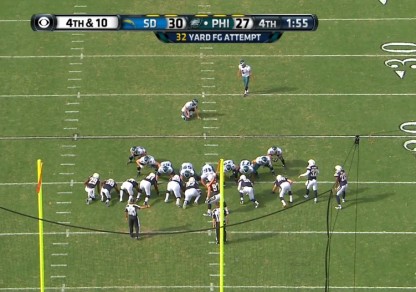