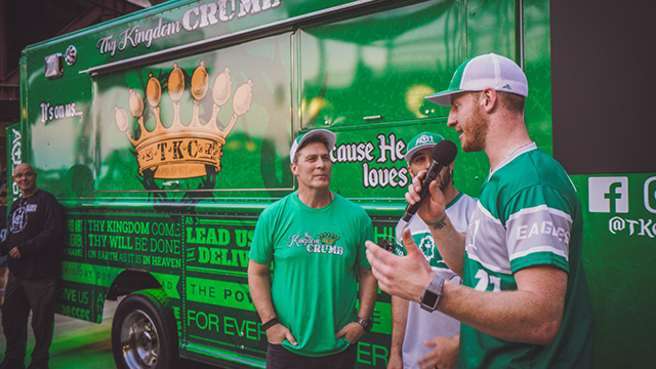 On January 17, 2019, AO1 announced that it was purchasing a building on I-295 in Cherry Hill, NJ, location of home base for the food truck. Cherry Hill is approximately 30 minutes from where the Eagles play at Lincoln Financial Field. The building was previously the home of Rockhill Restaurant, operational for four years. Connect Church, also located in Cherry Hill, has additional locations in Philadelphia and Northern New Jersey.

Carson Wentz is also known for his deep faith in God. The characters in his foundation’s name are tattooed on his wrist and stand for “Audience of One”. Wentz says that it is the motto of his life to do everything for an audience of One, the Lord. He seeks to freely share God’s love with others every day. The same can be said of the food truck. Did we mention that all the food is served to all for free? According to Kyle Horner, senior pastor of Connect Church. “We serve people from every socioeconomic, ethnic and cultural background. It’s a reflection of our community.”

The announcement regarding the restaurant has generated a lot of excitement and interest, as well as questions regarding what it will be like. Horner says that when the food truck shows up, it’s “like a block party”. When “Thy Kingdom Crumb” makes an appearance, there are music, tents, games, and more. If the atmosphere surrounding the food truck’s appearance is any indication, the restaurant sounds like it might be a super fun place to visit! Stay tuned!