Watching a baseball game can be a relaxing, enjoyable experience. However, not everyone knows the basics of baseball. If you want to be able to follow the action on the field and truly understand the game, you’ll need to know its rules, especially the most basic ones. In subsequent posts, we’re going to look at many of the rules of the game. In this post, we’ll talk about legal and illegal collisions at home plate.

Plays at the plate can be really exciting, and often violent. While it may seem like sometimes there are no rules governing them, that isn’t true. In fact, the rules have changed in recent years thanks to injuries sustained by catchers.

According to the MLB rule book, a runner attempting to score can’t deviate from his direct path to the plate in order to initiate contact with the catcher or any other player covering home plate. If the ump rules that a runner initiated contact with the catcher in such a manner, the ump will call the play dead, and all other runners have to return to the last base they touched.

“The failure by the runner to make an effort to touch the plate, the runner’s lowering of the shoulder, or the runner’s pushing through with his hands, elbows or arms, would support a determination that the runner deviated from the pathway in order to initiate contact with the catcher in violation of the rule.”

Unless the catcher is in possession of the ball, he can’t block the path to the plate of the runner attempting to score. 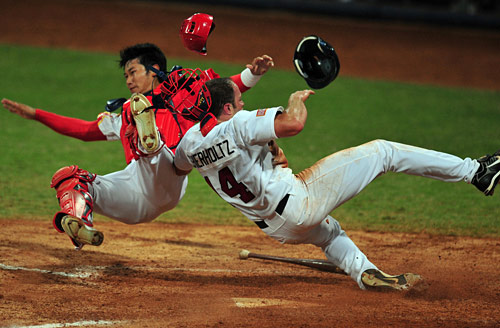