In the NFL, there are four quarters of play divided into two halves. The length of the game is 60 minutes, making each half 30 minutes long and each quarter 15 minutes long. Even though the length of play is 60 minutes, the game clock is stopped so frequently that games often exceed three hours in duration. Officials have to stop the game for media advertising. They also stop the clock when any pass is incomplete or any play ends out of bounds, as well as when they need to assess an instant replay challenge. The clock also stops after a field goal try, a kickoff, points after a touchdown and when possession of the ball changes.

Other reasons the clock is stopped include time-outs, penalties, and injuries. In some cases, teams will sacrifice the loss of a down by spiking the ball (throwing it straight into the ground) to stop the clock in order to save time and increase their chance to score.

The play clock is used to deter teams and players from attempting to delay the game, which can result in a penalty. After the referee marks the ball in play while the clock is stopped, the offense has 25 seconds to start the play. When the game clock is running, the offense has 40 seconds to start the next play after the previous play has finished. Without the play clock, there would be no way to prevent unnecessary delays or to ensure that the game progresses in a fair and timely manner.

The first half and second half are separated by a 12-minute halftime break. Halftime allows the teams and the audience a break. Teams go to their locker rooms to regroup, strategize, and assess the first half. Teams change ends of the field at the end of each quarter. In both the second and fourth quarters and in overtime, an automatic timeout is called by the officials when there are two minutes left to play. This is called the two-minute warning. 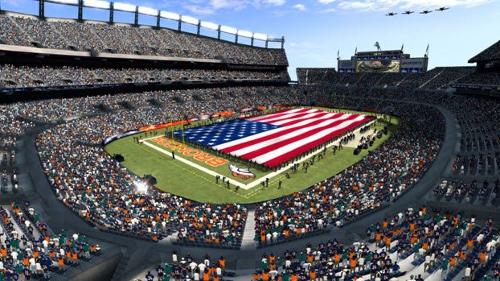