The Rules for Suspended Games

Watching a baseball game can be a relaxing, enjoyable experience. However, not everyone knows the basics of baseball. If you want to be able to follow the action on the field and truly understand the game, you’ll need to know its rules, especially the most basic ones. In subsequent posts, we’re going to look at many of the rules of the game. In this post, we’ll talk all about suspended games. 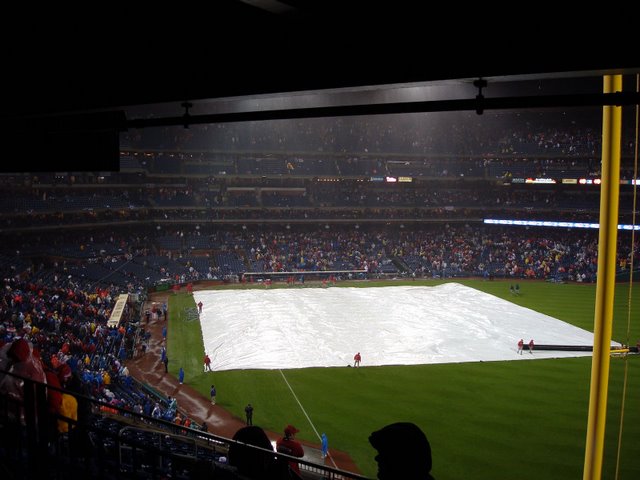 It’s only natural to go to a baseball game with the expectation that you will get to see the full game from start to finish. However, weather or other factors will sometimes cause a game to be suspended. Don’t worry, though! There are also rules governing when the game will continue, so fans should still get to see the game completed.

According to MLB, a game shall be suspended and must be completed at a future date if the game is terminated for any of the following reasons:

1: A curfew imposed by law;

3: Light failure or malfunction of, or unintentional operator error in employing a mechanical or field device or equipment under the control of the home club (a retractable roof, a tarpaulin, other water removal equipment);

4: Darkness, when a law prevents the lights from being turned on;

5: Weather, if a regulation game is called while an inning is in progress and before the inning is completed, and the visiting team has scored one or more runs to take the lead, and the home team has not retaken the lead; or

6: It is a regulation game that is called with the score tied.

According to MLB rules, a suspended game shall be resumed and completed as follows:

1: Immediately preceding the next scheduled single game between the two clubs on the same grounds; or

2: Immediately preceding the next scheduled doubleheader between the two clubs on the same grounds, if no single game remains on the schedule; or

3: If suspended on the last scheduled date between the two clubs in that city, transferred and played on the grounds of the opposing club, if possible.

4: Any suspended game not completed prior to the last scheduled game between the two teams during the championship season shall become a called game.