The New England Patriots wear nautical blue, red, silver, and white.  In the year 2000, they became one of the only teams to change their rounded numbers to block numbers.  For their home games, they wear a blue jersey with white numbering and gray pants with blue stripes and a red outline. They wear a white jersey with blue numbering to match their blue pants with red outlining stripes for their away games. Their numbers on both their home and away jerseys are outlined in red to match the red outlines on their pants. They wear a silver helmet with the “Flying Elvis” with both their home and away uniforms.  The Patriots had a third, alternate uniform that consisted of a red jersey with white numbering to match their white pants with blue and red stripes. They used a throwback helmet with “Pat Patriot” on it; however, in 2013, the NFL outlawed alternate throwback helmets, which in turn caused the Patriots to retire their red uniforms. 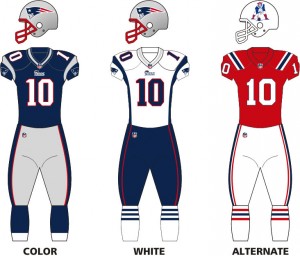 The original logo was a tricorne hat, which was used only for their first season in 1960.  From 1961 to 1992, the Patriots logo was a Revolutionary War minuteman hiking a football, which was known as “Pat Patriot.” This later became the name of the team mascot. The logo was drawn by a Boston Globe cartoonist, Phil Bissell, who spent just 45 minutes creating it. He was asked to draw a potential logo to illustrate the team for the Globe, but the team loved the drawing so much that they bought it from him and used it for the next 30 years. In 1993, the logo changed to the gray face of a minuteman wearing a tricorne hat with a star that transitions into a flowing red, white, and blue banner.  This is known as the “Flying Elvis.” This is their current logo along with a wordmark logo of Patriots.

The mascot for the New England Patriots is Pat Patriot.  He is a Revolutionary War minuteman and wears their home uniform, the blue jersey with silver pants and a “Flying Elvis” hat.